This concert is generously sponsored by John Bierbusse.

Picosa’s final concert is one of innovation, as composers observe but veer away from tradition in form, sounds, and inspiration.

Considered to be the turning point towards modernism in music, Debussy’s Afternoon of a Faun, transcribed by Jonathon Kirk, is the nexus where tonality and atonality meet through ambiguous harmonic progressions, melodic lines and free lyricism. In creating Tres Lent (Hommage to Messaien) Joan Tower writes, “I grew to love the many risks Messiaen took — particularly the use of very slow “time,” both in tempo and in the flow of ideas and events.”

Kyong Mee Choi’s what prevails and Judd Greenstein’s At the End of a Very Good Day use music in contrasting styles to process their experiences with modern tragedies. Choi’s music is filled with extended techniques as she writes, “what prevails is dedicated to those innocent people who were killed by acts of crime and violence.” Following the tragic and unexpected death of a close friend, Judd Greenstein wrote that the experience inspired him “to live all my days, and how it becomes possible to live with the unavoidable tragedies that life presents.” His light and minimalist style evokes this positive ongoing outlook.

Jackie Russell’s Gina was written for Picosa as part of its residency at Elmhurst College and chosen from all the student works for tonight’s concert program. Finally, Joan Tower’s Petroushskates is jointly inspired by Stravinsky’s Petrushka and the composer’s fascination with ice skating as she writes “the curving, twirling, and jumping figure are woven around a singular continuous flowing action.” 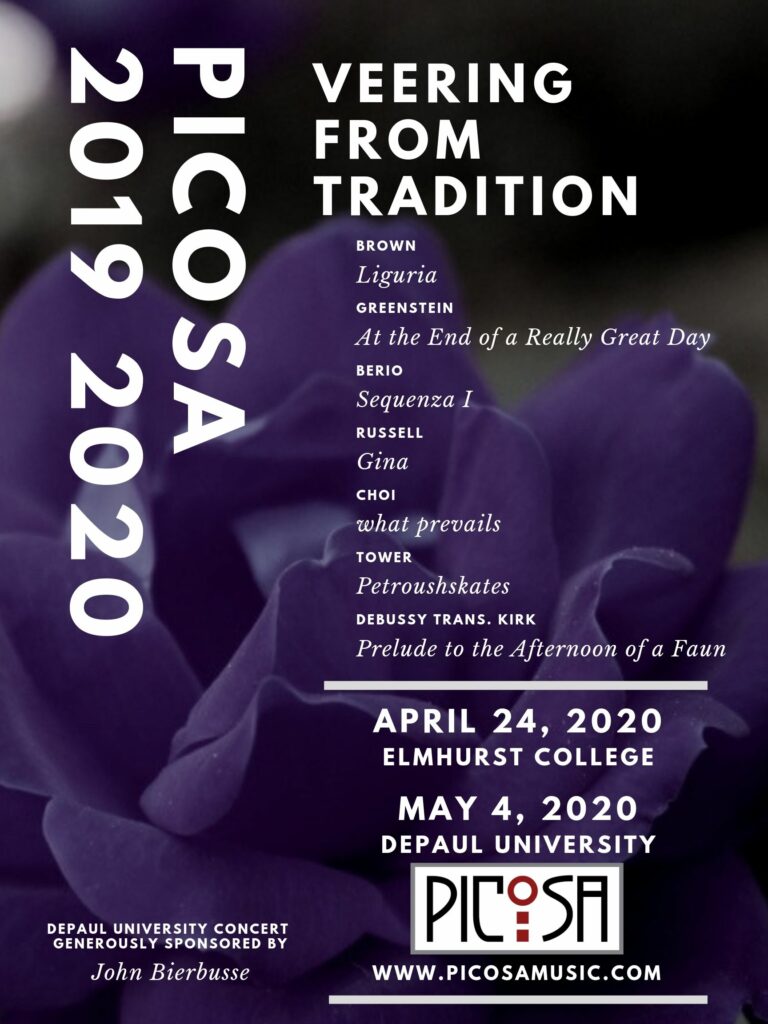